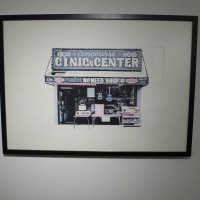 Bera was born in Milazzo , Sicily, in 1981 .
She grew up in a small village in the middle of the Sicilian countryside , where at a young age she started to experiment with different medias : music, dance, painting, graffiti.

At the age of 18 she moved to Milan where she attended the New School of Fine Art, focusing her attention on photography and etching, constantly contaminating one by the other. In these years of study she made her first experiment with photo-etching,creating an original reinterpretation of reality. The decisive push came the year she spent studying at the School of Fine Art in Lisbon in 2004, where she had her first encounter with screen printing , which she constantly mixed with photography, becoming a constant source of experimentation in her artistic career.

In Portugal she made an enormous amount of prints connected with social themes, that soon led her to the first paste ups , slowly the paste ups turned into complex mixed media posters, choosing as settings abandoned buildings and forgotten places,this was the beginning of a process that led her from paste ups to pure painting , from abandoned buildings to empty factories.

After graduating in 2005 she spent some time travelling in the United States, Asia and Australia, returning to Milan at the end of 2006 she obtained a phd in photography.
Bera White currently works at “Le Raclet” screen printing studio, a meeting point for artists from all over the country, a place that involves different styles and sources of inspiration: from photography to street art, to pure painting.