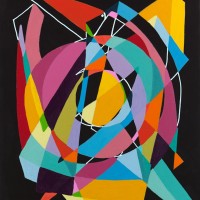 Kenor, 1976
Started painting in 1990, son of a sevillan painter and photographer, emerged into street art in the late eightees and decided to transport and give his art to the city of L'Hospitalet and later Barcelona; walls, trains, free and moving art.  Kenor is fascinated for tipography and logos, experimenting with letters without a prototype.
In the early 2000 is when he starts to discover all what he had inside to share, "color, life, eyes, clouds, parallel worlds, dreams, hope, illusion, the town, corners, the smell, laughs, light, touching with your eyes closed"
Sensations...Emotions...Different visions of an oniric path.  Doubt, options and exits.  Forgeting where's north or south?
Influental dimensions joining the path between time and space.  There's a window that never ends... Is it his exit? Infinite?
Desoriented I see the different faces of the universe... Absurd visions and perspectives reflect in front of it....
Creating the expectation of travelling through walls where change and incoherence play with us... The distortion of space gives the receptor infinite posibilities... The protagonist falls, capable of choosing and imagining a different dimension that helps him grow.  Visions that suggest the exploration and exit of the world, recreating spaces of freedom and opening windows, gives life to destruction decorating cities until the end. www.elkenor.com