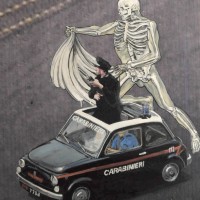 Gionata Gesi a.k.a. Ozmo, graduated from the Academy of Fine Arts in Florence in the early nineties, after a debut in the world of comics, he focused painting and graffiti.
In 2001 Ozmo moved to Milan, where in addition to his activity in the galleries, he also painted in public spaces along with a small group of friends, this is where this group lay the foundation for what would become the Italian street art scene. Ozmo is one of the undisputed pioneers of the Italian street art scene.
Some of Ozmo’s most recent work includes his solo show in The Museo del Novecento in Milan as well as the large out door wall he painted for the MACRO (Museum of Contemporary Art in Rome).

From Lines to Shadows