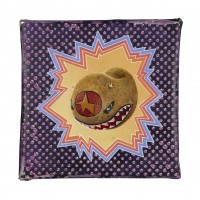 Matthew Knight is starting to make a name for himself lately with shows in Amsterdam, London, Belfast and Dublin. His work can be found on an array of surfaces from the streets to abandoned buildings. The Ballygowan native paints characters and designs filled with crazy amounts of detail and patterns. He grew up in Pakistan and this had a huge impact on him, ‘I experienced one hell of a crazy and wonderful upbringing. The influence that country had on me has never diminished.’ He explains how the troubles also were a real eye opener when he returned to Belfast. ‘The first I learned of the Troubles or any religious background that I had was on the flight over 2 hours before my plane landed. I was so used to Eastern culture that Western culture has always felt quite alien to me. So I draw from all those experiences putting that into each and every character I create.’ ‘I like my grey backgrounds as it reflects how dull the backgrounds can be compared to the characters in them where I concentrate all the colour.