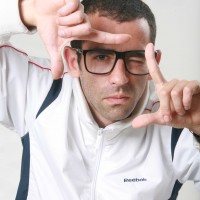 Andrea Mattoni was born into a family of artists from Varese on April 7th, 1981 , his father Carlo, conceptual-behavioral artist, uncle Alberto, famous illustrator for the creation of the character Lillibeth and his grandfather Giovanni Italo, painter and author of some of the most important series of figurines for Liebig and Lavazza.
Andrea started drawing from his early years immersed in an extremely stimulating world. He began using the name Ravo in 1995, when he began his adventure as a (graffiti) writer. This activity continues until the beginning of 2000s, when he enrolled at the Academy of Fine Arts in Brera, partially abandoning the use of the spray can for research using oil and acrylic on canvas.
In 2003, he created and founded together with two friends the space THE BAG ARTFACTORY in the Bovisa district of Milan, which became a real attraction for artists. Later he became assistant to the curator Manuela Gandini in Gigi Rigamonti's gallery Artandgallery in Milan. At the same time, he began his collaboration as an artist with several art galleries, which led him to deepen his pictorial research, and in parallel his work with spray can, reporting what he has experimented on canvas for years directly on the wall. His growing interest in classical art, a family tradition that has become a part of his life and his academic studies, leads to a project in 2016 "recovery of classicism in the contemporary": the intent is to recreate great masterpieces of the past with spray on the wall, making them accessible to all, also creating a bridge with the museum institutions that conserve them.

New Art Works by Will Barras and Andrea Ravo Mattoni